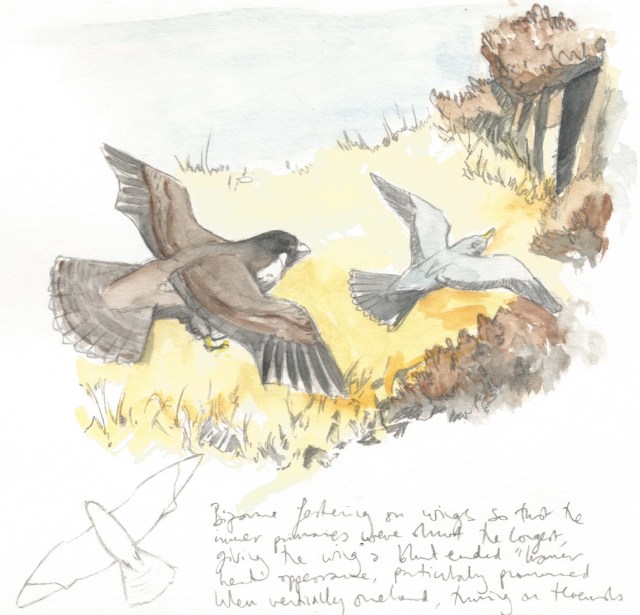 Crucial to note the staggering encounter between a peregrine and a cuckoo yesterday afternoon on the hill. I don’t know how it began, but my eye was drawn to two shapes rushing across the white grass on the face above me. I recognised the latter as a young peregrine, but it was only when I managed to get my binoculars onto it that I realised that the prospective prey was a male cuckoo. He jinked and flared nobly as the gap narrowed but it was hardly enough. The falcon made ground with every lunge until it seemed that it was game over, but suddenly the cuckoo vanished.

The peregrine flared up and came to a sudden standstill in an outcrop of rank heather, and I realised that the cuckoo had somehow managed to wedge itself into a cleft in the stone. Outfoxed, the falcon stood back and peered into the darkness, but as I afterwards found, this cleft was really the start of a rabbit hole. For an hour and a half, I watched as the peregrine preened, idled and then endured a flying hailstorm. With a grand shiver, it finally shook off the droplets of water and took to the air again, circling slowly round above me until it had gained incredible height against the white clouds. I noticed that its wings made an odd shape against the sky – the innermost primaries were the longest feathers, giving the whole wing a bizarrely blunt, “hammer-head” silhouette. This must be a stage of the moult, and perhaps any peregrine-minded readers can explain further?

I wandered up to the crevice where the cuckoo had “gone to ground” and peered in, but there was no sign of the bird. I’ve read that several prey species can go into a state of shock following a close encounter with a peregrine, and he may have been trembling away underground for some time. Reaching in, I found that the back of the hole was beyond my fingertips, and suddenly remembering the abundance of adders on this face, I pulled out my arm with a certain enthusiasm.

It makes perfect sense that cuckoos should provide raptors with a viable food source, and after the BTO’s research into cuckoo migration, we certainly have evidence that these birds are not invulnerable. This particular cock was cunning enough to make a snap decision under some fairly unpleasant circumstances, and while I didn’t like to see the falcon go home empty-handed, my heart was with the hunted. I produced a quick sketch of the encounter for my notes, but it hardly does the moment justice. I daresay that the strange conformation of the falcon’s wing is the most accurately represented part.

2 thoughts on “A Lucky Cuckoo”