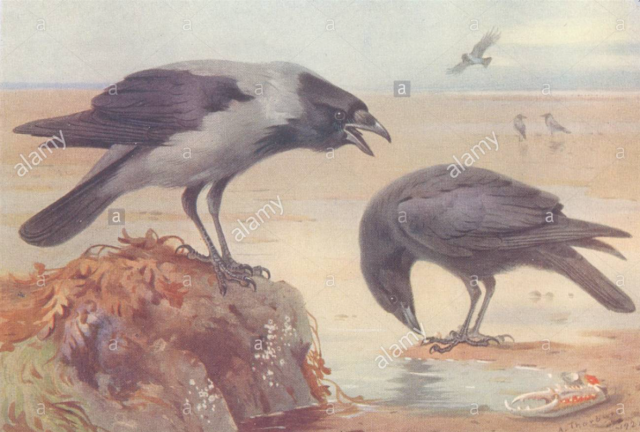 Having written about the discovery of a hoodie crow last month, I can’t resist a quick note to record the fact that it has remained in situ. I see it every day, and it continues to hang around in a gang with a dozen other black corbies on the hill road. It’s becoming a permanent fixture, and I watched it picking away in the sheep fields for a quarter of an hour last week.

The movement of crows is strange and mysterious. This is clearly a group of young or immature birds, and they’ve taken up loose residency for the autumn. But without the hoodie crow as a marker, I would struggle to identify this group and be sure that I was seeing the same birds. Crows come and go, and groups of youngsters move over large areas in an ambiguous haze of black feathers. Without the hoodie to mark them, these would just be crows.

It may be that this group stays until the spring. That’s when dominant breeding birds will begin to set up territories, and there is a chance that this hoodie will become part of a pair. Research has shown that breeding crows are the worst and most aggressive egg-thieves, and they do most damage to other birds like black grouse and curlews. They actively hunt for nests and chicks, and they can specialise in predatory activities. If this hoodie crow survives the winter (and the growing number of goshawks in the area), then it may lose its status as an object of curiosity – it may become an adversary.